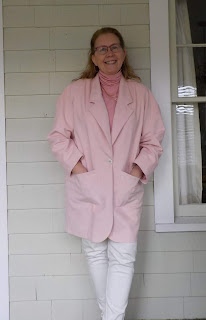 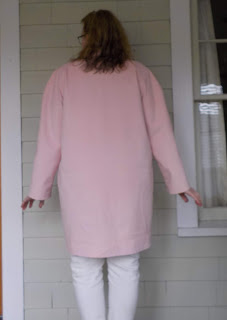 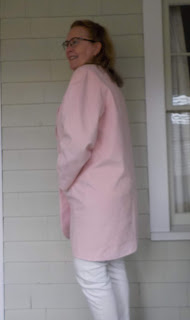 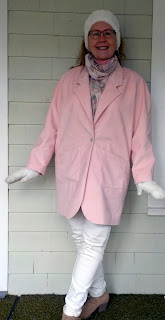 So, here's how this happened...This fabric was re-gifted to me after I gifted it to my mom like, 30 years ago. It became one of those "it's too special to sew" fabrics and sat in her stash. While her gift was sitting, I had also gifted myself a nice chunk of this pink ultrasuede (from SR Harris of Mpls in a mega-deal). I made a princess Diana inspired double-breasted sort of jean jacket that I loved and wore but at some point donated. Fast forward to 2019...when mom re-gifted this fabric I really couldn't believe that she never used it! I'd forgotten all about it! Then, this pink is announced as one of those "colors for/of the year" so I'm like, "well, I MUST MAKE SOMETHING"! Psst... I would have made something anyway because, you know, ...PINK!

Enter the internet and multiple searches for Pink Suede Jacket. My inspirations: 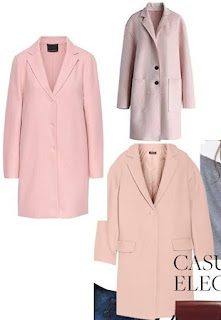 I wanted 3/4 length, sloped shoulders, and a sort-of cocoon shape. I have so many patterns. I know I could have purchased a current, maybe independent pattern that would work but...I have so many patterns. So I decided to use McCall's 2689. This is in my stash because when I worked at Northwest Fabrics in Minneapolis we were allowed to keep the "guts" of discontinued patterns and I kept the guts of this one 😉. It may not look like the inspiration but I'd made the jacket before and was fairly confident I could make it work.
Pattern adjustments: Major reduction at the shoulders to eliminate almost all of the 80's big-shoulder look. After making sure I had enough hip width, I lengthened it about 10". I also used a method I learned years ago where I pinch out about 1/4" in length along the lapel fold line to keep the lapels close to the body.
Constructions notes: I used the teflon foot on my industrial for most of the construction and when I used my regular machine (Viking Huskvarne Scandia) I just put a piece of scotch tape on the bottom of my normal foot presser foot. 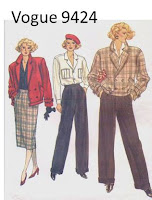 Here's where it gets weird...First, I have apparently made every single garment of this pattern at some point because ALL of the pieces were cut and there are many, many pieces. As I was sorting out what I needed I found two extra pattern pieces from a Vogue pattern. THEY WERE FROM THE JACKET I MADE OUT OF THE ORIGINAL PINK ULTRASUEDE IN THE 80's! Vogue 9424. I still can't figure out how that happened! 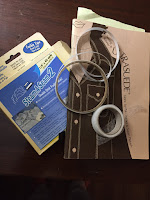 Now, on to the actual sewing stuff. These were my hand-holders. When I sewed my 80's jacket I used the instructions for a flat felled seam but that requires a lot of thinking because the seam allowances need to be adjusted. Thinking has not been one of my strengths lately (like the last 4-5 years = living with teenagers and teacher stress!). For this jacket I decided I wanted the seams to be a little softer so, I treated it like a regular fabric. The Palmer/Pletsch book is a must...and you don't need to search for the original version new version! One of the best things about the book is that it's full of choices, you can determine which method works best for your project.

The absolute most time-consuming part was using steam a seam to make sure all the seams stayed flat but it was so worth it! You can tell I forgot to do it on the top of the pockets (I would've/should've used rubber cement there) though 😞. Oh well!

The lining is completely bagged by machine. IMHO every. single. pattern. should include instructions for sewing this part of a jacket by machine.

I know I should have taken the time to put in a bound buttonhole, but I just didn't feel like it, LOL! 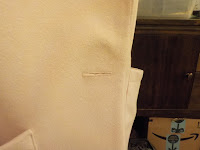 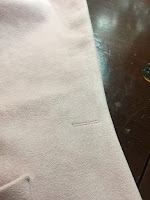 Somewhere there are other detail pictures I took but I can't find them and this post has been waiting long enough.

Happy sewing to all! 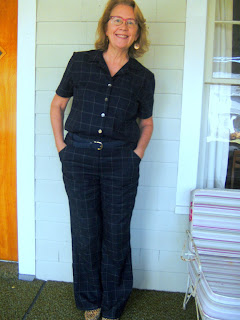 The base of this wardrobe is my amazing-pattern-matching most recent outfit. That’s right it’s an outfit, not a jumpsuit. This fabric has been basking away in my stash since I’m guessing 2002? (I know this because it was purchased from the fabulous S.R. Harris in Minneapolis after I returned to Ohio.) In all that time I had no idea what to make until I saw this fabulous jumpsuit, and later on a long-sleeved blouse. After at least 1-1/2 years of thinking, considering, and analyzing, I decided this fabric would serve me better in two pieces rather than one. Would have preferred a long-sleeve blouse but didn’t have quite enough fabric for that.) Follow the lines my friends. I can't believe how well my windowpanes match! Even the lines in back match!!           (I did not plan this.) I CAN wear it with this jacket from last year but, um, the fit is a little bit loose because of my healthy eating plan (#Fasterwaytofatloss) Both the ivory Gi 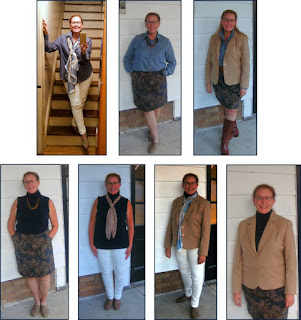 One of the reasons I missed this deadline was because I kept thinking of more information I absolutely HAD to add to my reviews! I made handwritten notes while sewing each piece and my original strategy was just to type in the notes and submit. But then I started remembering all those conversations I had with myself while sewing the garments and felt the need to share every.single.thought. Haha! Every single garment was completely finished by 7:00 p.m. on Sunday which should have given me plenty of time to take pictures, review, and submit, right? Well, wrong in my case. Anyway, I got this fabulous new wardrobe!! You may or may not notice two things about these pictures. I started photographing just as the sun was setting and by the time I took the pictures with the jeans there was hardly any daylight left (this is more noticeable on the PR composite review). The picture on my stairway was taken at about 11:55 p.m. LOL! As I was busily typing away, I realized I didn't photogra 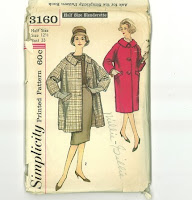 Just when I thought I was too busy for anything except complaining about being so busy…I came up with a little tutorial sort of thing! After making the good witch of the west costume forced me back into my sewing area, I was motivated to tackle one of those projects that is easy to put off for a long, long time. Sometimes, even more than a year. This project is resizing a vintage coat pattern. During the great coat sew along I caught Marji fever (scroll down to the May 15th post) and purchased many vintage coat patterns. This one in particular just had to come home. Then someone on PR made a fall coat out of corduroy… then I saw this fabulous wide-wale corduroy at a very good price…that also needed a home. Well, they’ve both been very cozy waiting for a fall. Last fall, this fall, next fall, whatever! Finally I’m ready to resize the pattern – yippee! This is how I did it. Step 1: I went to the nearest Threads resource – mine happens to be in the sanctuary (a.k.a. sewing area, a.k.a